Schedule An Estimate
717-620-9420
Alone Eagle Remodeling Sepcializes In Craftsman Quality And Luxurious Bathroom Remodeling.
You are here: Home / Our Remodeling Blog / Instead of asking for a Lower Price… Request a Flood Test for your Tile Shower

There’s plenty of homeowners that are interested in how “cheap” they can get a new tiled shower for…  This does play a few factors on the overall mentality but the words “cheap” and “tile shower” should absolutely NOT be used in the same sentence (oops, but I just did that…)

Why do you think Tile Showers should be cheap (dang it, did it again) anyway?  I’m not exactly sure but I’ll just go ahead and list out some reasonable scenarios on the matter.

Good!  Now we’re going to talk about cars for a minute – If you were going to purchase a brand new car… would you accept the one you want when the dealership openly says, “…the brakes were not tested…”, and offer a lower price?  Think about that and get back to me.

Just to touch on waterproofing which I’ve done a million times over, it must be there.  The shower area needs to be protected underneath the tile so moisture and water does not attack your structure, framing etc…  There’s plenty of waterproofing materials on the market and a smart contractor should be aware of all of them.  Every contractor that uses them, may only use one brand or a combination of many.  There’s plenty of different situations so the use of a fabric and liquid membrane may be the best approach.  It’s all a matter of how experienced a tile contractor is with using the products.

After your shower is waterproofed, you’d like to know if that waterproofing works, right? (Now go back and re-read my comment about the car brakes)  Well of course the manufacturer says it works but it’s of best practice for the technician to test it out so there are no lost efforts or issues down the road.

Sounds like a huge deal but not really.  Here is how you do it: 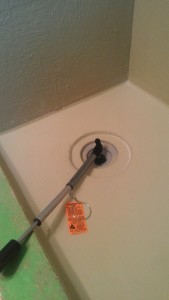 When it’s determined that the shower pan holds water, work can commence and tile can be installed with no fear of leakage.  It’s a simple process but it does tack on to the project.

A decent sized flooding period is 24 hours – townships that do call for this look for at least 2 hours but if you want things to be overkill, it can sit for a few days, as well.  At some point, letting it sit too long can bring on evaporation of water which would bring false readings but it’s mainly just a common sense practice that homeowners should be aware of.

Just some things to think about that will save you both money and stress in the future because the whole benefit of a Home Improvement is to actually improve your home.

"This note is way overdue but our thanks and appreciation for your wonderful work transforming our master bath have not dimmed at all; I still look around every time I go into the bathroom and think – WOW! This is so awesome – especially the shower which is truly unique and quite beautiful, not to mention, great to shower in.

We appreciate the care, precision and excellent craftsmanship you brought to every aspect of the job, as well as, the care you took with the rest of the home and all of the various kids and animals.  You have tremendous work ethic that was evident from the very beginning, when we started meeting at your distributors, till the last piece of hardware was in place.  Our bathroom was not the first serious remodeling that we have ever done in any of our homes, and there seem to be far more stories about how things have gone wrong – time & cost overruns, poor quality work & so on; then stories where people got more that they hoped for.  We feel very fortunate to count ourselves amongst the latter.

On behalf of the kids, I also want to say thank you for the gifts you gave them at Christmas.  They really like them and have them prominently displayed in their bedrooms.  And a final thank you for the card you gave us and the lovely sentiment it contained – we strive to have a home that is warm and welcoming to all who enter, where people feel respected & appreciated for what they contribute to it.

Thanks again for all of your hard work – We look forward to working with you again in the near future!"