Schedule An Estimate
717-620-9420
Alone Eagle Remodeling Sepcializes In Craftsman Quality And Luxurious Bathroom Remodeling.
You are here: Home / Our Remodeling Blog / Oh NO! A Contractor took my money and didn’t finish the job… What should I do?

Stay calm and don’t panic, but now you have to face the fact that you have been taken.  Every month, I receive a handful of phone calls with similar stories about unscrupulous contractors taking advantage of homeowners which creates an immediate call to action.  Understandably, I can’t do much in these unfortunate situations because 90% of the budget has already been spent and I would be expected to pick up where the job was left off… (Ever watch Holmes on Homes?)(100% of the time the job needs to be “re-started”)

In January I was contacted by a homeowner in Mechanicsburg, PA, who was in a big mess with a company that he found on Angie’s List.  They contracted for a remodel of all three of their bathrooms and offered a “special” price if all three were paid up front (RED FLAG #1).  Two of the three bathrooms were torn apart, and one of which was 90% finished after being on the job (on & off) for several months.  I originally did not meet with the homeowner because he was still under contract, but I did direct him with the proper steps to pursue for the time being.

Two months later, the homeowner contacted me again and expressed that his lawyer gave him approval to hire a new company since the legal process has been started and the fact that the bathrooms were unusable at this point.  We scheduled a meeting and I arrived on site to see a horrific mess.  The basement bathroom was half torn out and some shoddy plumbing work with the floor drain…  Since the basement bathroom was not as important as the master bathroom, I took a few notes and measurements and we ventured upstairs, through the bedroom and BAM!!!  At the first glance and a few double takes, this is what I said:

“Yep, we’re going to have to tear this down and start over…”

As I started to point out the obvious problems, we started talking about what needed to be done to make this right.  After a few minutes of chatting there came a brief silence and we started laughing because that was all we could do to halt the aggression that both of us were feeling at that time and that was the start of our trusted and working relationship!  My recommendations were to contract and complete one bathroom at a time, starting with the master bath so that we could regenerate his daily routine.

Initially, the homeowner talked about using the same tile scheme but I disagreed because I didn’t want to leave any trace of what was currently done.  The shower was improperly built with no waterproofing on the walls.  The shower floor was not sloped properly and had the wrong tile drain, wrong shower floor liner, uneven tiles, cracked tiles, bad cuts with noticeable saw marks; just an overall bad layout.  The existing vinyl floor in the bathroom had not been removed and cement board was just nailed down over top and tiled over.  The bathroom vanity drawers on the right side only opened two inches before hitting the door casing… (Really?) 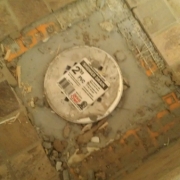 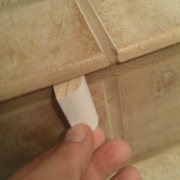 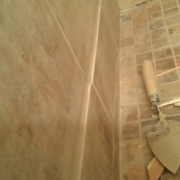 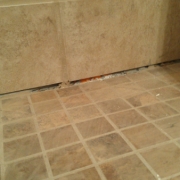 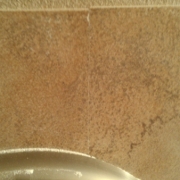 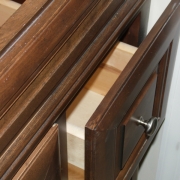 Luckily, the existing wiring and plumbing was not touched and the drywall was in decent shape for us to patch a few minor spots.  Yet, of course…, the worst was to come when demolition started.  When tearing out the shower walls, we found a soda cup in the wall that was full of mold growth to the top.  It was only a matter of time before the cup broke down and the mold growth started from the inside out.  The shower rough-in valve looked ok at the first glance (aside from the snap on fittings…) but I didn’t see the normal “white” Teflon tape around the threaded connections of the ports.  Instead, I thought I was seeing some type of clear plastic so I wasn’t feeling very good about the valve.  I cut it out and turned it around only to find that plastic bags were used to seal the threads (now I’m really feeling like Mike Holmes…).  We replaced the whole valve and turned the existing one over to our client for his day in court to provide additional evidence. 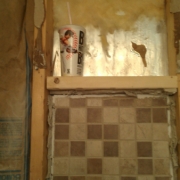 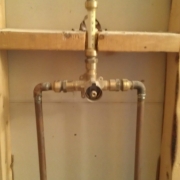 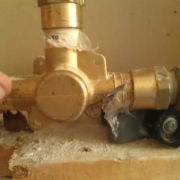 Step by step we rebuilt the shower and bathroom, working 13 days straight through.  The shower bed was properly sloped towards the new Laticrete brand “Tile In” drain which was centered on the shower floor.  The two-shelf niche was centered.  We completely waterproofed and flood tested the shower to ensure maximum protection of the structure.  We reused the toilet and vanity cabinet, and provided a nice granite countertop which matched up well with the glass mosaics selected for the back of the shower niche.  The entire bathroom floor was stripped to the sub floor, built up with plywood and prepared with a Waterproof and Crack Isolation membrane from Noble Company.  In finishing the project, we patched drywall, touched up paint and installed new baseboard and door casing (making sure those dang drawers fully open).  On the last day of work, we turned over the keys as our cleaning lady was finishing up and the template appointment for custom shower door glass was underway.  The storm was over and our client was all smiles! 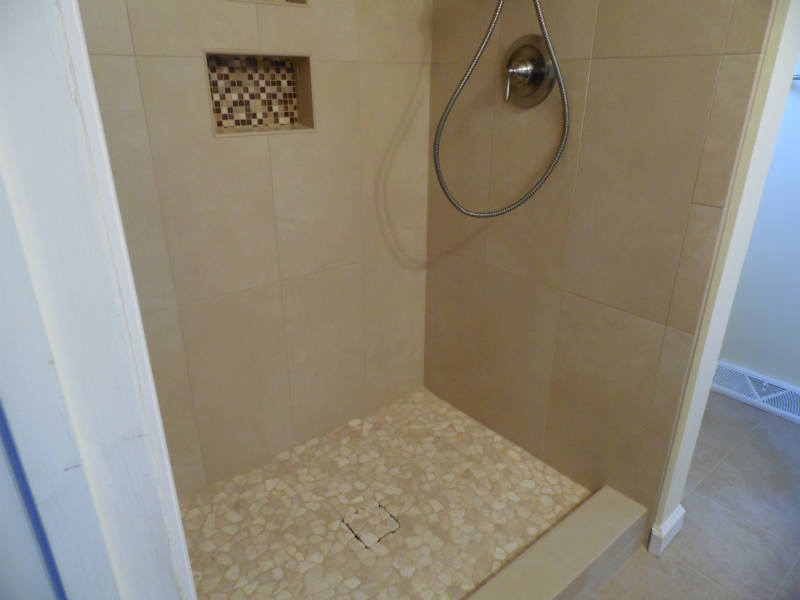 You may be able to find some useful information about Researching a Contractor in our past blogs.

"Work was performed on time and in a professional manner. Todd, the owner of Alone Eagle and sole worker was punctual, conscientious, careful, and workmanlike. Kept us well informed of next steps. Highly recommended.