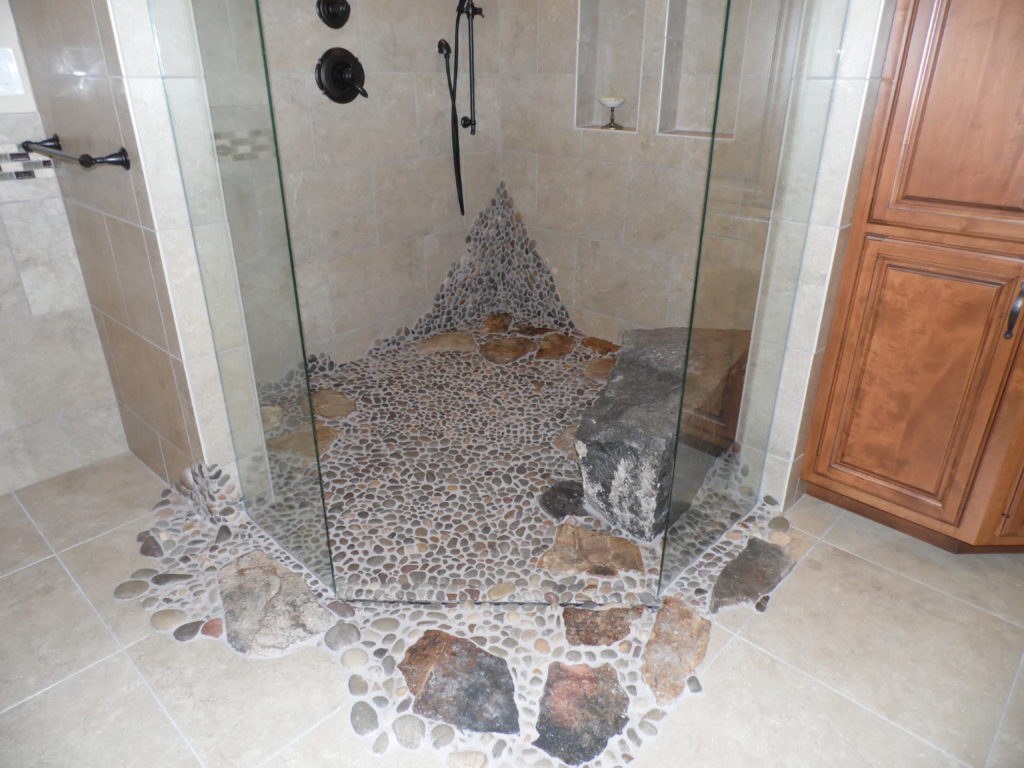 Somewhere along the lines… I ended up with this big project outside of Harrisburg, in Thompsontown, PA.  Mostly because there aren’t really any contractors in that area and they thought I was the coolest one in all of America and the free world!  🙂  All kidding aside and after seeing the photo’s you can only imagine the time I spent on this bathroom remodel… so obviously, the homeowner’s better like me because I all but moved in the house for a month or so.

The idea was that they had a really crappy mid 80’s looking room with bad wall paper, an ugly 3 seater bathtub and a (bow-chicka-wow-wow) chandelier so it was time to make a change. 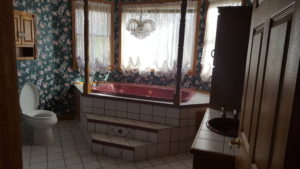 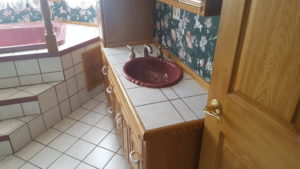 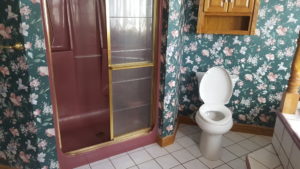 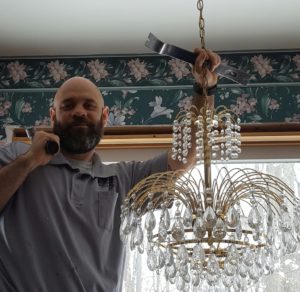 I mean seriously… what a horrible looking chandelier.  Anyways, the idea was to remove the tub and create a wrap around cabinet setup by the window and then of course make a larger shower.  The toilet did end up getting moved so that we had some room to get a nice big pantry in there!  An open format shower was the desire but really didn’t have much clue other than using linear drain and not having a swinging door.  After all the thought was in place, a cabinet company came up with the cabinet layout which gave the room for the shower… The homeowner wanted to have a pebble floor but none of us knew “exactly” how far that was going to go. 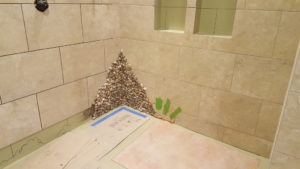 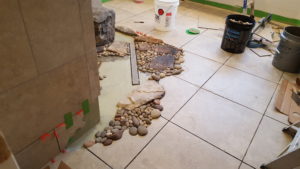 I figured a 6’x6′ shower was VERY large to have just wall to wall pebbles so I thought we could travel some of the river rock up the walls to create some dimension to the shower.  Then we thought of adding some pavers too because we decided on using loose pebbles from the stone yard which are very cheap when buying 5 gallon buckets of them.  Then joking around I mentioned about adding a huge boulder for a shower seat and they were all like,, “OK,, let’s do that”  It was like one of those backfire moments when I knew I got myself into some serious trouble, lol. 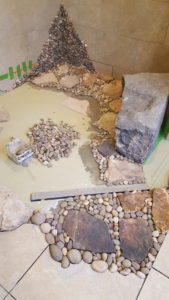 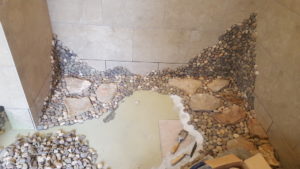 After finding a huge boulder that weighed approximately 950 pounds… and found out that it was a part of the original Rockville Bridge in Marysville, Pa so it kind of made for some real character.  Oh, and luckily I have a friend with specific type of rolling cart that I used to get it through the house… and I’m just going to leave it at that because I’m not telling all of my secrets!  Just for measure, I’ll let you know that I did have to install jack posts into the crawl space below to support the weight of this stone… so NO, you can’t just go dropping heavy rocks all over your house for fun.

This is me going crazy with all these pebbles… I mean talk about going home everyday for a week totally bug eyed!  Oh and I never started going bald until marriage… 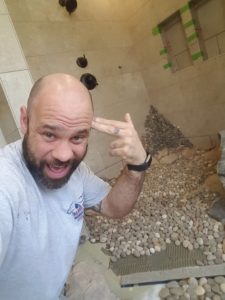 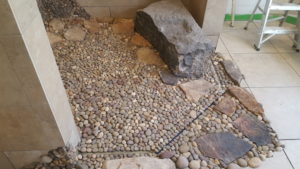 It’s really neat when you seal the stones because you get to see how it looks when it’s wet! 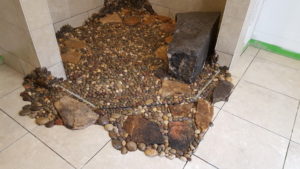 Here’s a look at the finished photos with heavy frameless glass, granite countertops and backsplash that I installed.  It was a fun project and one that I will always be proud of especially since my client’s gave me a real heartfelt and wonderful review on the houzz website! 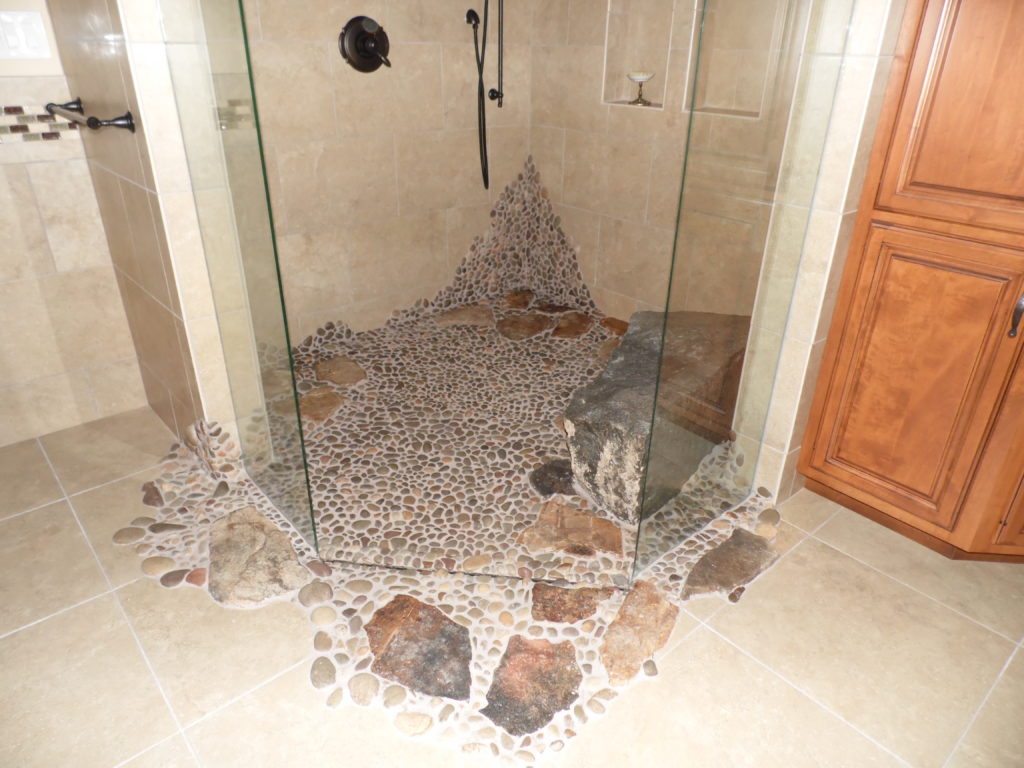 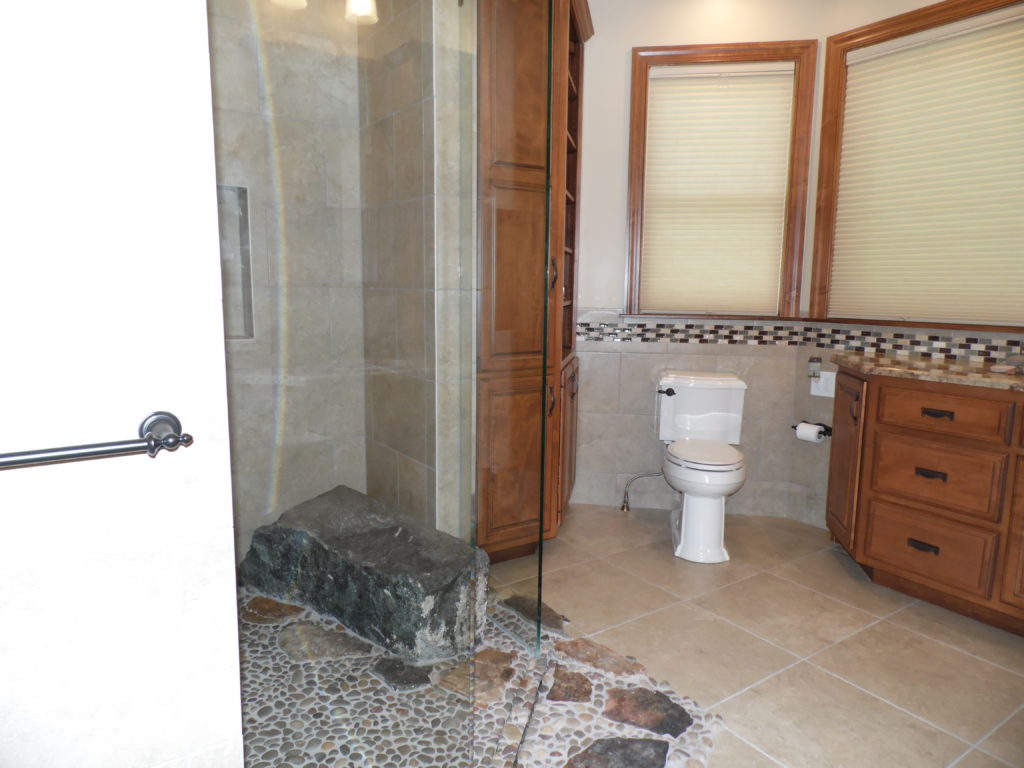 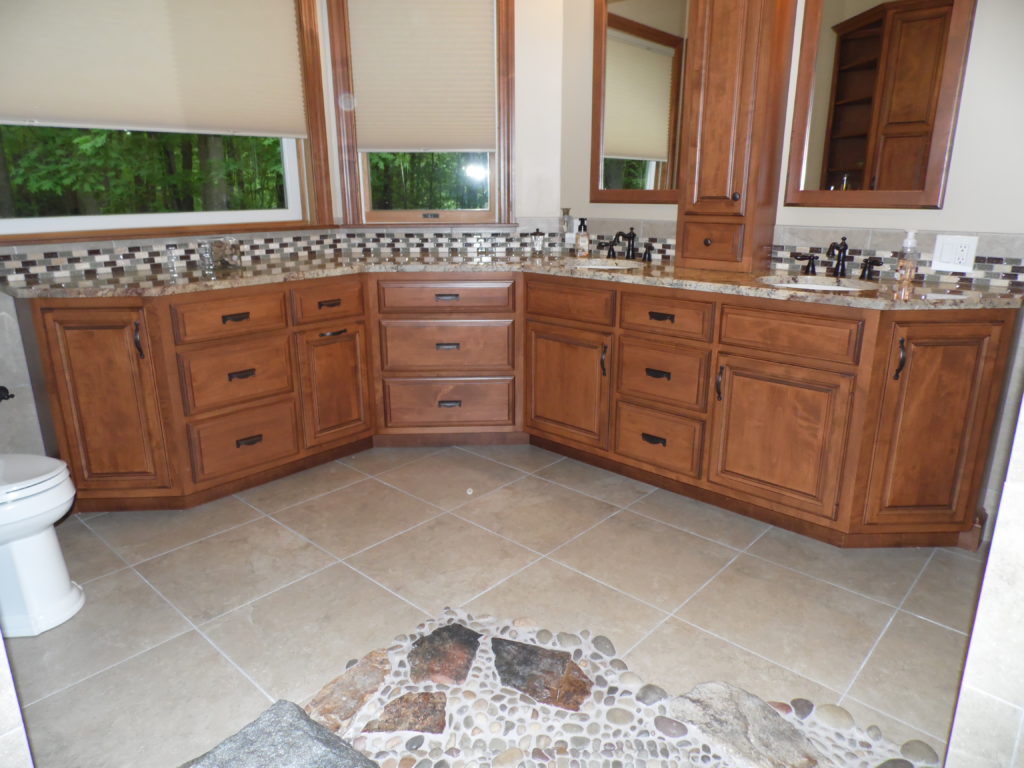 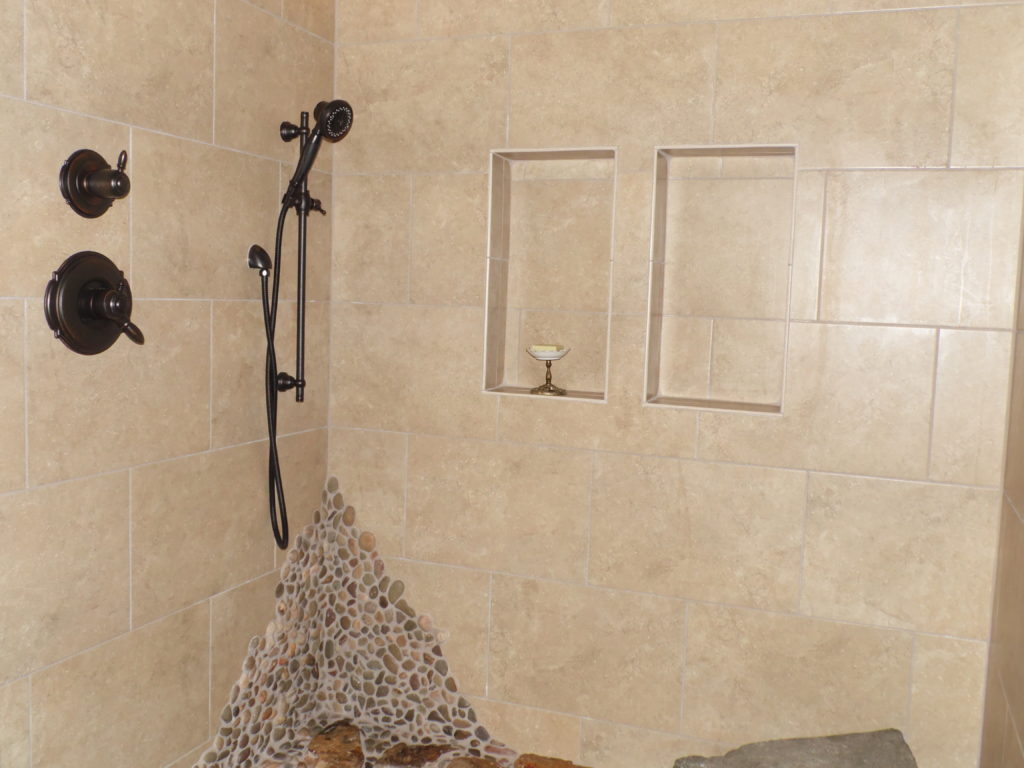 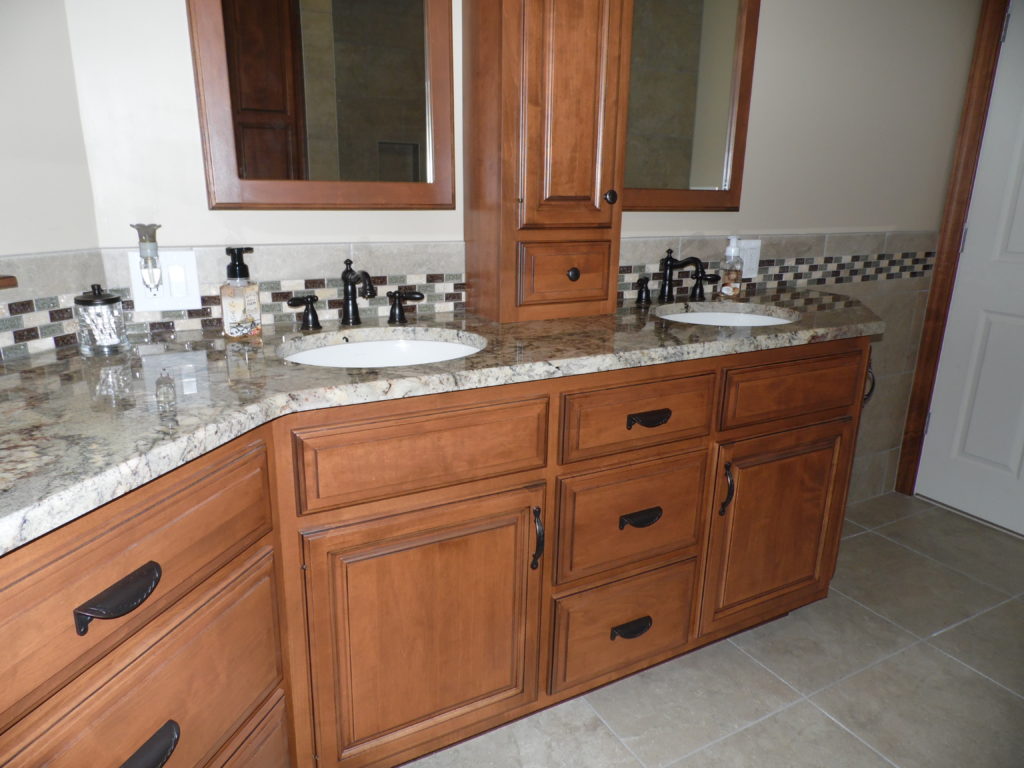 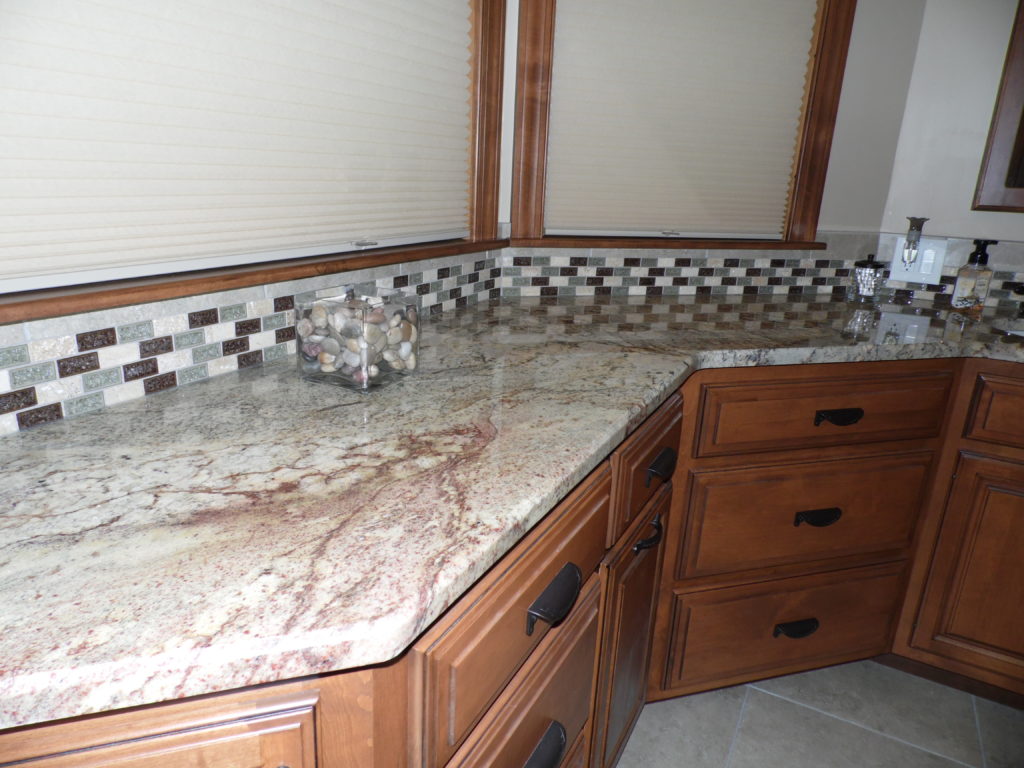 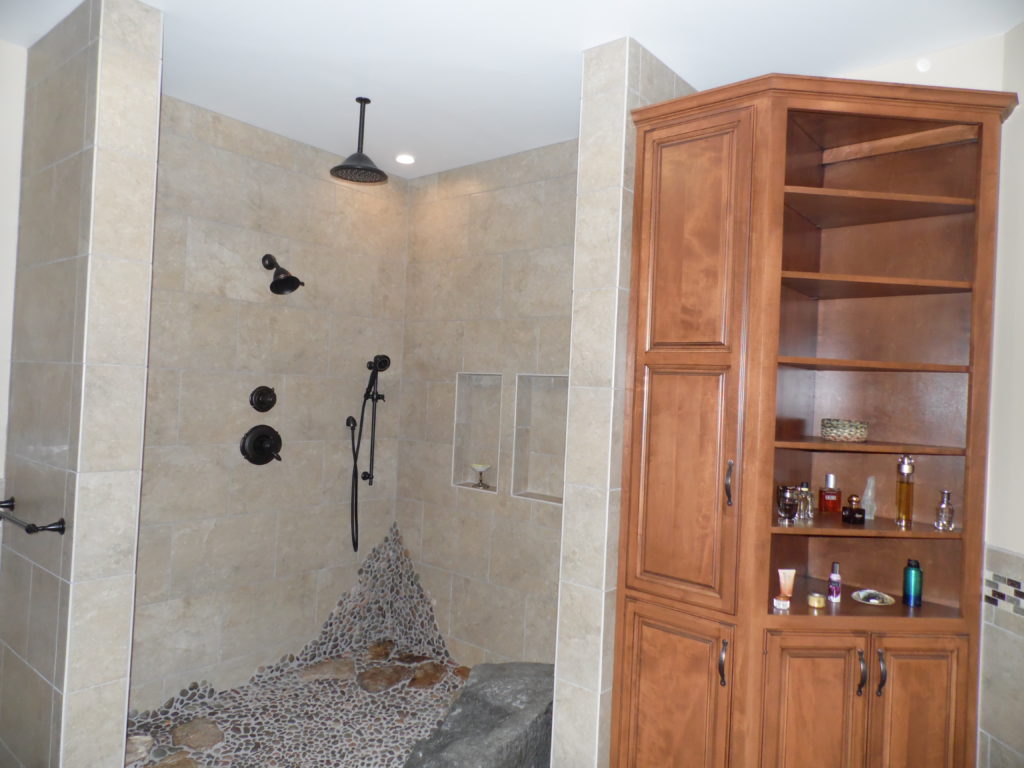 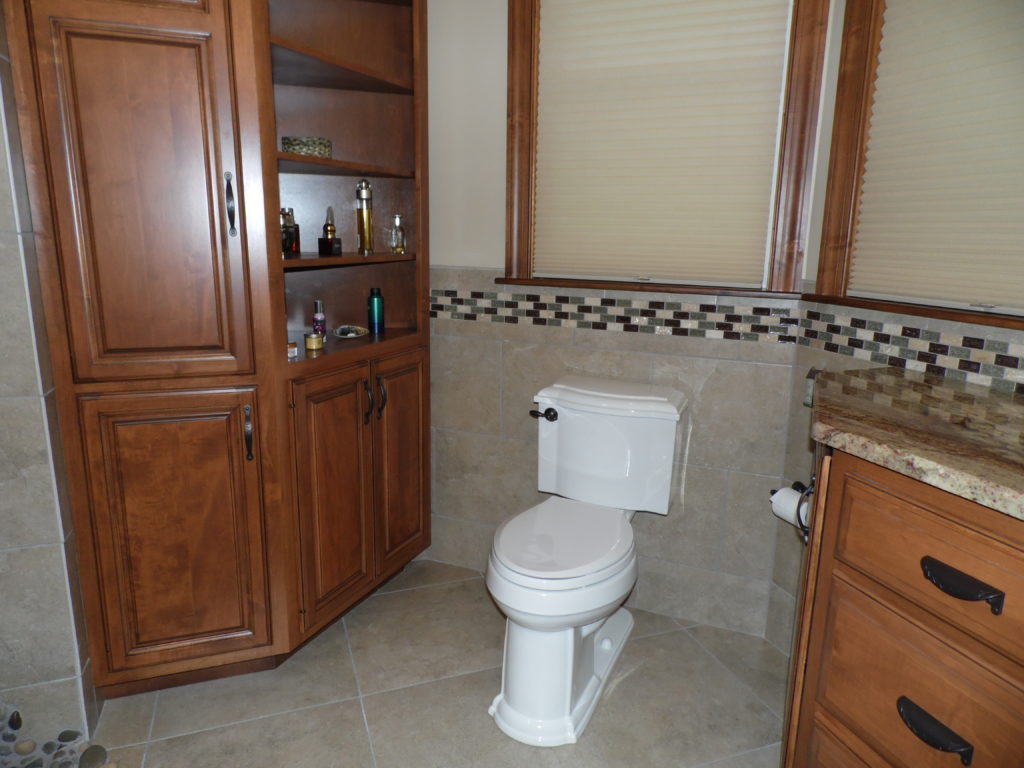 If you have any questions about my projects or are looking to bring your ideas to life, then feel free to get in touch because I love doing bathrooms!!!!!!!!!!!!!!!!!!!!

We would love to hear from you! Please fill out this form and we will get in touch with you shortly.